Material maker 0.91 is an unofficial, experimental and very special release of Material Maker.

If you intend to use Material Maker to, well, generate PBR Materials, I'd strongly recommend that you skip this release.

If you want to test performance improvements or the brand new Tones node that are coming in next releases, or want to use Material Maker to generate sound, this is the release you need. Please don't hesitate to report bugs so they can be fixed before next (real) release.

Yes this release of Material Maker can generate sound, and yes I know it is useless. I guess it could be improved to generate all kinds of sounds (like BFXR or Chiptone), but let's concentrate on PBR materials for now.

Anyway, here are the nodes you can use to create sounds:

Here's a very short demo that shows what can be done with those nodes:

And here's a longer video that shows are audio graphs are built:

Focus for next Material Maker release was to make it faster. This experimental release should be a lot faster that 0.9: instead of regenerating shaders whenever a parameter is modified, this one uses shader parameters for all real, color and gradient parameters. Shaders will still be regenerated for other parameter types, when adding/removing control points to gradients or when connecting/disconnecting nodes.

Here's a video that shows the difference:

This node shows an histogram of its input and can be used to adjust the tones of its output. 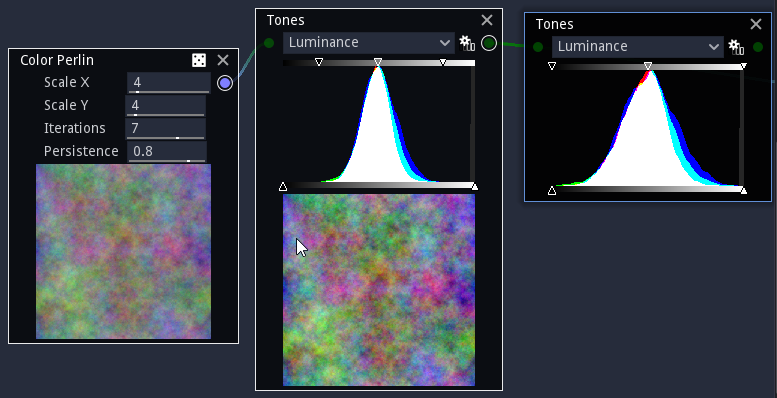 Great, looking forward to the tones/levels!

Hey, just download that release! (or are you using Linux?)