We're now about half way to Material Maker 0.7, so if there are node types you really think are missing in Material Maker, please just describe them in a comment to this post. Of course I cannot guarantee all of them will be in 0.7, but at least the "low hanging fruits" will be, and I'll be aware of other requests so they can be added to subsequent releases.

Activity has been a bit crazy here since the 0.6 release. Thanks to Gamesfromscratch's video first, then articles on CGChannel, BlenderNation and renderru.com (and maybe others I'm not aware of), downloads skyrocketed from 1-or-2 to dozens per day. And we're now a tiny bit above 2000 downloads for this release (with about 15% for Linux version). If you downloaded 0.6, please don't hesitate to post feedback. Bug reports and ideas for future releases will help a lot.

Old features are back

The focus for 0.7 was to re-implement features that were in 0.5 but didn't make it into 0.6 due to the huge refactoring. So the following nodes will be back:

Material Maker 0.7 will detect loops (again), so feel free to try and create some (and report bugs if you succeed).

0.7 will introduce a scratches node. I must admit I had no idea of how to implement it until I experimented a bit (mainly experimented by modifying the parameters) with the Fuzzy scratches Shadertoy from Daedalus.

The Remote and I/Os nodes that are used to define the parameters, inputs and outputs of node groups have been greatly improved. I/O ports can now be reordered and Material Maker will do its best to maintain connectivity inside and outside the group.

Similarly, the Switch node will maintain connectivity when possible as you change the number of choices or the number of outputs.

All gradient parameters will have 4 interpolation options. Linear interpolation will remain the default option so materials created with older releases will still be rendered correctly. It will also be possible to drag a gradient from a node to another one or from the library to a node to copy the gradient parameter value. The gradient editor cursors will be arrow-shaped so it's easier to see where they are located.

The Buffer node will have a LOD output and a parameter that selects the associated mipmap, that can be used as a cheap blur effect

Last but not least users who like to spend time on Shadertoy  will appreciate the new Debug node that can show the shader code generated for its input. That shader can be copied and pasted directly into Shadertoy to be tweaked (or debugged). The main goal is of course to be able to verify a brand new custom shader behaves correctly (or figure out why it doesn't).

The preview pane has been improved a lot: it will be possible to manually rotate the view or the object, to restart rotation by clicking a dedicated button. The environments have been revamped and rendering options optimized to make the 3d preview look better and more accurate. Most preview improvements have been submitted by new contributors !

The convolution node type (used by normal map generation, blur and emboss) has been improved and made more generic.

The shader editor has been updated and it is now possible to reorder parameters, inputs and outputs.

A graph tree will be shown when the upper right button in the graph view is pressed. This tree shows the whole hierarchy of the current material, and double clicking an item will directly show the corresponding subgraph. This feature is very handy to navigate through hierarchy if you like to organize your materials using groups. 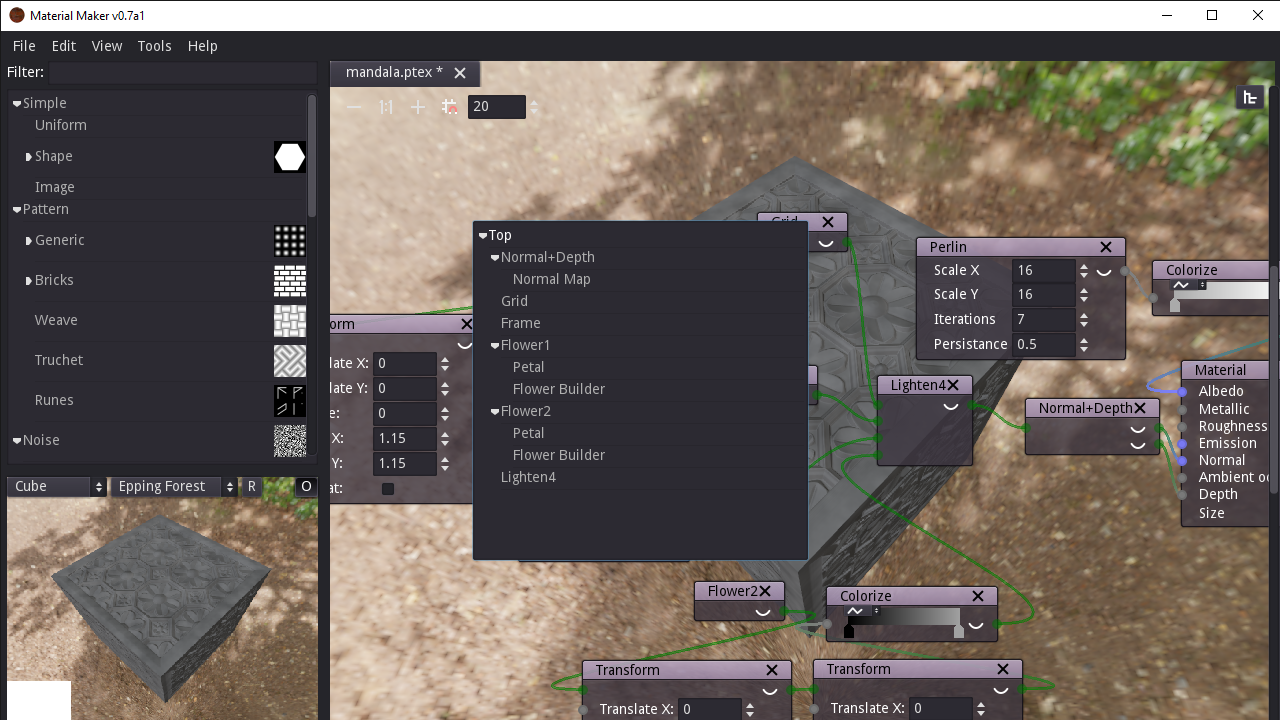 If you cannot wait and are familiar with Godot (and if you are not, you really should give this game engine a try), you can try it right now. The sources are on Github in the master branch (edit: the branch has now been merged into master). Please don't hesitate to report bugs!

Coding is done already, and tests, bug fixes and doc writing remain, so 0.7 should be ready in 2 or 3 weeks. So if you can think of useful nodes that are missing in 0.6 and not describe above, please feel free to ask in comments. They might be implemented while testing.  :D

A node that can export a single tileable image (combining albedo, normals, etc) would be awesome. You can get basically that right now by exporting from Material Maker, importing into Blender and applying it to a plane, and then rendering.

Hmm any details about how you render with Blender ? What kind of camera, projection, lighting and environment ?