The calm after the storm

The month following the 1.0 release has been absolutely crazy in terms of downloads. And by crazy, I mean Material Maker 1.0 just reached 15k downloads, way beyond all other releases. 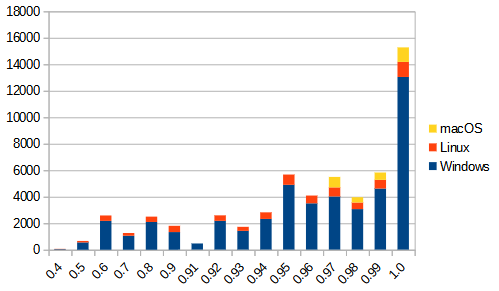 I guess this is mainly because that release has been covered in great videos from GameFromScratch (who's been promoting this project for quite some time) and askNK, plus a few videos from smaller channels, and more recently an excellent tutorial by Pavel Oliva. If you just downloaded Material Maker for the first time, I'd heartilly recommend that you watch this video (you also may want to start with Kasper Frandsen's easier and shorter tutorial, but there were a few changes in the nodes he used), and to join our discord server.

This huge download count is also probably related to the fact there's some symbolic meaning in "1.0", suggesting some kind of maturity level. To me, there was a very simple definition for 1.0: "a usable release with undo/redo". Believe it or not, undo/redo is a pretty basic feature, but it's a pain to implement. Not that it is difficult, it is just boring, the ultimate level of boring, so it took a lot of time for me to focus on this.

Anyway, if you just downloaded Material Maker, I hope you'll have a lot of fun using it (and/or it will be useful for you, of course). Please don't hesitate to send me feedback and ask questions. And if you donated on itch.io or decided to support me on Patreon, thanks a lot for doing so.

So now we have a 1.0, we need a simple definition for 2.0. And let's make sure it will not take another 4 years to get there. What about "a robust Material Maker that benefits from Godot 4 new features"?
Which would mean:

Of course there will be a lot more features that are not related to Godot 4. Please don't hesitate to comment if you have ideas (but don't worry if you don't, I have more than enough to keep me busy for quite some time).

In late 2021, I had quite a few leave days I had to use quickly, and I decided to use them to boost Material Maker's development. Therefore, I spent quite a few Mondays between October and December adding new nodes and new features. Material Maker Mondays truly boosted development of the (boring) undo/redo feature, to the point I ended up thinking this was a pretty good idea and decided to call them MMondays.

Now, thanks to the Epic MegaGrant this project received in late 2021, those Mondays will be back for a few months. The MMondays 2022 campaign started last week, and last Monday (september 5th) was dedicated to adding coloring to 3D SDF in the EasySDF node. I also started to improve the buffer node for better support of high resolution textures generation, but some of the optimizations I tried need more work.

With those MMondays, Material Maker is now somewhere between a hobby and a part time job, but I'm not yet sure where the cursor should be (or where I'd like it to be). In the long run, this will of course depend on funding, but this current campaign will make porting to Godot 4 a whole lot more secure.

As you may have noticed, there are four releases per year, in January, April, July and October. Generally, the spring release can contain funny or weird features for April Fools (such as 0.91 that had a few nodes to generate sound), and the autumn release has more stuff for demoscene usage. This is mainly due to the Inercia demo party that occurs every year in early november and where Paulo Falcao covered Material Maker in his seminars in 2020 and 2021. And there might be some Material Maker this year as well.

This is always a great opportunity to improve advanced shader generation features of Material Maker that make it possible to create dynamic and raymarched materials.

For Material Maker 1.1, I started improving the EasySDF node (a node that has an easy editor to create 2D and 3D shapes) to be able to add the maine PBR channels to the shapes. EasySDF will then be the best solution to create logos and complex patterns, as well as colored 3D shapes to be used in PBR materials. 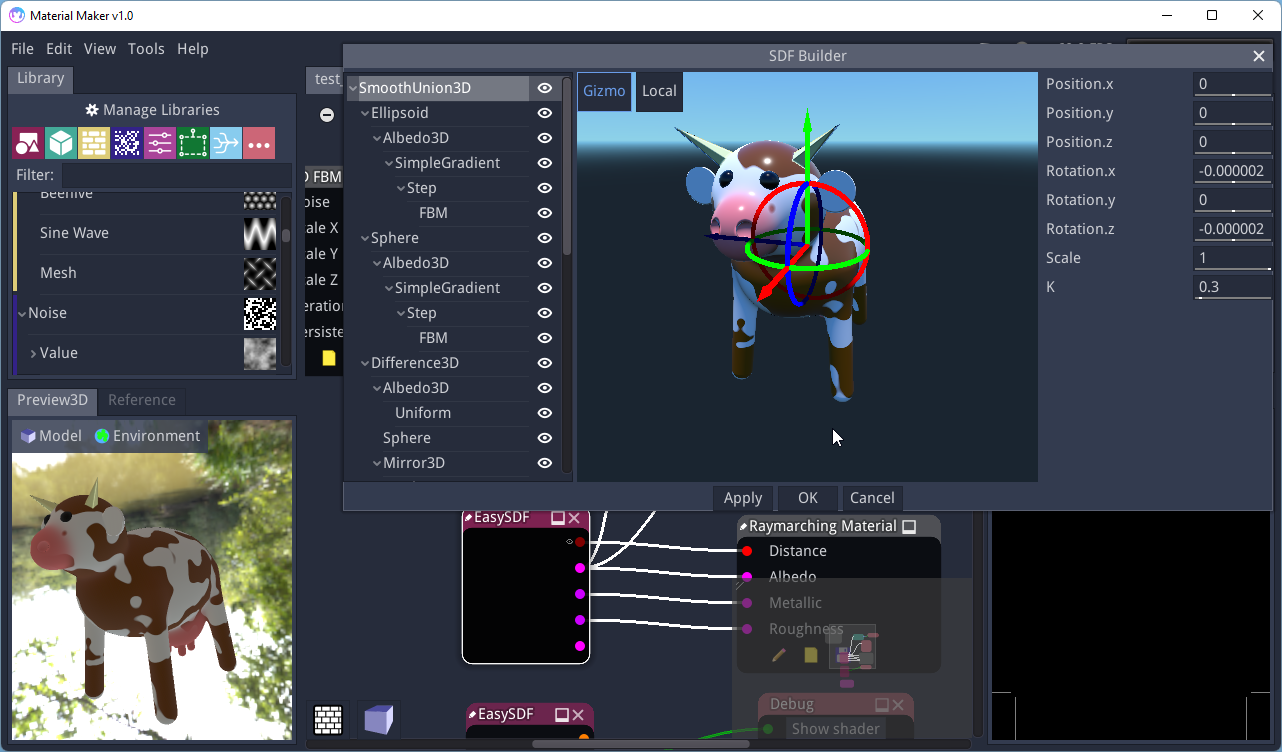 This new release will also have new nodes, better support for generating high resolution textures and quite a few bug fixes.

Been following MM since v0.7, which I downloaded in January of 2020, and you've been able to add a variety of great and interesting features that I never imagined MM would have. Keep up the good work!

Congratulations ! Material Maker is really a great soft that deserves to succeed ! As you mention ideas, I have a little one myself: maybe you could add an option in the export to Unity (or other engine) settings to only export the maps and NOT the material itself. Why would you ask? Because, in my game project I use a custom shader which is overwritten each time the material is exported (or more exactly re-exported). I work a lot by iterations. Nothing awful, I can always set my custom shader back by hand in the engine. But for each export in a massive material/texture production, it's a bit annoying. Regardless, keep up the good work, your software is awesome, and now that it's 1.0, I plan to talk about it to my (little) French community. You rock !

You can easily customize exports: select the Material node, hit Control+W, click the pencil button, go to the Export tab, select the Unity export and remove the files you don't want (or you can duplicate the export target if you want both options). You can then copy your custom Material node using the node's context menu (copy and paste items).
Et si t'as encore des questions, n'hésite pas à me contacter sur Discord. ;)